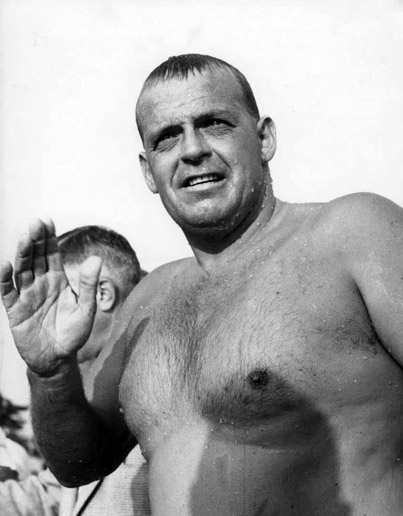 Cliff Lumsdon got an early start on long distances. At age six, he joined the Lakeshore Swim Club, and by 18 he was the world marathon swim champion. Coached by Gus Ryder, another inductee in Canada's Sports Hall of Fame, Lumsdon won the Canadian National Exhibition 15-mile marathon swim in Lake Ontario in 1949, an event that at the time was considered the world marathon swim championship. His 7 hour, 54 minute, and 55 second swim made him a household name and won him the Lou Marsh Trophy as a Canada's top athlete in 1949. Lumsdon duplicated his CNE victories in 1950, 1952, 1953, and 1955 (to go along with a second-place finish in 1962 and third place in 1951), making him a five-time world champion in a span of only seven years. The 1955 CNE event was particularly memorable for Lumsdon. Eschewing the 10- and 15-mile courses that had been used previously, organizers decided to make the 1955 swim a cross-Lake Ontario event, a year after Marilyn Bell had been the first to achieve that distance. When bad weather was forecast, however, organizers instead simulated a 32-mile swim within the CNE breakwater. Most swimmers found the distance too challenging, and eventually Lumsdon was the only one of the 35 starters still swimming. As he tired at 26 miles, media attention grew and sponsors started offering additional inducements to go along with the announced $15,000 first prize. By the end of the race, Lumsdon had earned $84,000 in prizes and gifts, which included a house and a hunting lodge. Lumsdon was successful in other major professional marathon swims. In 1956, he became only the second person to ever conquer the Straits of Juan de Fuqua, 160 kilometers between Victoria, B.C. and Washington State. In so doing, he demonstrated his ability to swim in cold water, making the crossing in 11 hours and 35 minutes. Lumsdon also competed annually between 1954 and 1964 in the famed Atlantic City Around the Island Marathon. He won the 22-mile race in 1956 and 1959 and finished second on five other occasions. Lumsdon retired from competitive swimming in 1969. Following his amazing 21-year career, he worked in recreation for the City of Etobicoke and turned to coaching. Among his charges were Diana Nyad and his daughter, Kim, who in 1976 at age 19 became only the 11th person to swim across Lake Ontario. In 1982, he was awarded the Order of Canada. Lumsdon's contributions have been recognized in other ways. In 1988, the City of Toronto named a waterfront park after him and, following Lumsdon's untimely death, Solo Swims of Ontario created the Cliff Lumsdon Award for outstanding achievement in marathon swimming. Lumsdon, Ryder, and Bell were the award's inaugural recipients.