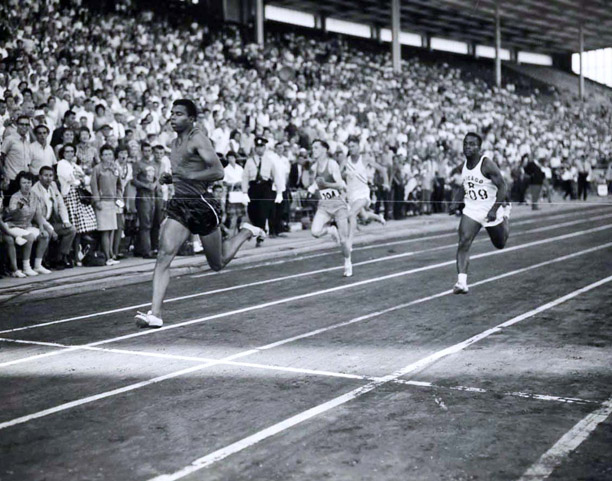 Sprinter Harry Jerome enjoyed a ten-year competitive career, reaching the pinnacle of his success at an age when most athletes have long thrown in the towel. According to teammate Bill Crothers, Jerome was "a world-class athlete, a world record holder, at a time when Canada wasn't known for track and field." A true pioneer in his sport, Jerome held the world record for both the 100m and the 100yd dash during the 1960s and helped elevate Canada's status on the international track and field scene. Jerome excelled in a number of sports at his Vancouver high school, particularly track and field. In 1959, at the age of 18, he was the first runner in 31 years to break Percy Williams' Canadian record in the 220yd dash. This brilliant performance caught the attention of the University of Oregon, which offered him a full scholarship to study physical education and train with its track team. During the 1960 Canadian Olympic trials, Jerome set his first world record by tying German sprinter Armin Hary's time of 10.0 seconds in the 100m dash. The two sprinters soon found themselves competing for the gold medal at the Olympic Games in Rome. Unfortunately, a muscle injury prevented Jerome from qualifying for the finals. Despite this setback, Jerome continued to shine on the University of Oregon track. In 1962, he anchored Oregon's relay team that equaled world record of 40.0 seconds in the 4 x 110yd race. Jerome arrived at the Commonwealth Games later that year with hopes of redeeming himself on the international racing scene, but a similar injury struck once more. Jerome, however, was a fierce competitor with an incredible hunger for victory, and these failed attempts only increased his determination to reach the podium. That is precisely what he did at the 1964 Olympics in Tokyo. The bronze medal that he claimed in the 100m event marked the beginning of his redemption in the eyes of Canadians and the first stepping stone on the path to glory. In 1966, Jerome tied the world record for the 100yd dash with a time of 9.1 seconds. His incredible comeback continued as he claimed a gold medal in the 100yd race at the 1966 Commonwealth Games, and another gold medal in the 100m event at the 1967 Pan-American Games. While breaking world records on the track, Jerome was also working toward a Masters degree in physical education. Following a seventh place finish at the 1968 Olympics, he retired from competition and devoted his life to the promotion and administration of amateur sport for Canada's youth. He was appointed to work on the National Fitness and Amateur Sport program in 1968, and the following year he embarked on a "Sport Demonstration Tour" with a group of athletes to promote sport in high schools across the country. Jerome was particularly adamant about getting young people involved in sport. In the early 1980s, Jerome directed the Premier's Sport Award Program in B.C, a provincially funded program geared at improving participation in sports among elementary school students. Jerome applied his experience competing in the U.S. and around the world in an effort to improve the state of amateur sport in Canada. For his remarkable work, he was named an Officer of the Order of Canada in 1970. For his outstanding athletic achievements, Jerome was named B.C.'s male athlete of the 20th century.