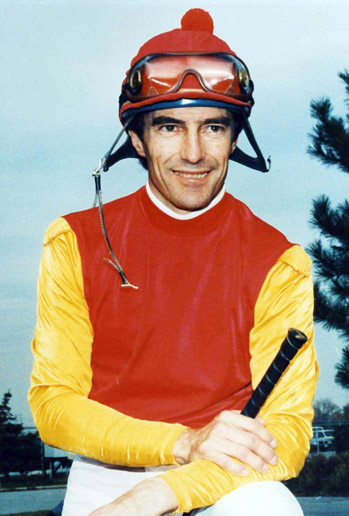 Sandy Hawley's record as a jockey in both the Southern Ontario and Southern California racing circuits are truly a part of racetrack history. In over three decades, Hawley won more than 6,000 races and was awarded horse racing's highest honours in both Canada and the U.S. Hawley started working at racetracks in 1966, hot-walking horses. His riding career began two years later, on October 14, 1968, at Toronto's Woodbine Racetrack. In 1969, he was named North America's top apprentice and the following year became North America's winningest jockey—a feat he achieved again in 1972, 1973, and 1976. In 1973, Hawley became the first rider ever to win 500 races in a year. This achievement earned him the Lou Marsh Award, which he won again in 1976, the same year he was made a Member of the Order of Canada. That same year, in the U.S., Santa Anita Park awarded him the George Woolf Memorial Award and he won the Eclipse Award as North America's top jockey. In 1986, Hawley won his 5,000th career race at Canterbury Downs and, two years later, he returned to the Ontario racing circuit after a decade in Southern California. His achievements in Canadian thoroughbred racing include the most wins in the Queen's Plate (four, tied) and the Canadian Oaks (eight), along with two Sovereign Awards for Canada's top jockey (1978, 1988). He won 18 titles at Woodbine Racetrack, a track which honoured him in 1986 with the Avelino Gomez Memorial Award. Hawley capped a remarkable 31-year career with a final ride, fittingly on July 1, 1998, at Woodbine—finishing third aboard Terremoto in the Grade III Dominion Day Stakes. This was the last of his 31,455 mounts, 6,449 of which had been winners (to go along with 4,825 seconds and 4,159 thirds) and added to his career total of $88,681,292 in purse earnings. He is a member of both Canada's Horse Racing Hall of Fame and the National Museum of Thoroughbred Racing Hall of Fame.