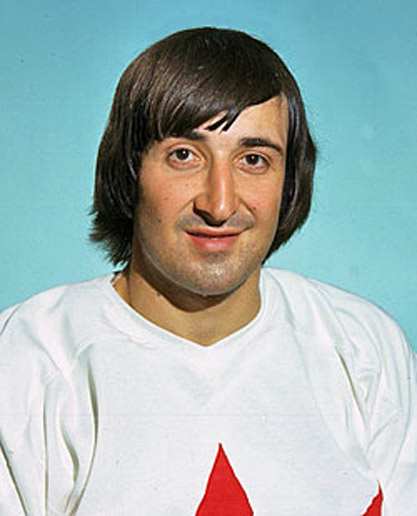 It began as a series which Canada was supposed to win all eight games and ended in the most dramatic goal in hockey history. The 1972 Summit Series was organized as a result of Canada's frustration at not being allowed to ice a team of professional players at the World Championships and Olympics, where the Soviets showed up with only their very best. And so, September 1972 was arranged to settle all bragging rights, best on best regardless of amateur status. Four games in Canada, Montreal, Toronto, Winnipeg, Vancouver, followed by four in Moscow. It was a series that pitted democratic Canada against Communist CCCP, professional NHL versus "amateur" Soviet hockey. It was East against West, known versus unknown. The laughable predictions seemed to have some merit in the early moments of game one as Canada scored in the first minute and again a minute later. The 2-0 score seemed about right, but then the Soviets found their legs, shook of their nervousness, and skated an out-of-shape Canadian team into the ice to the tune of 7-3. It was an embarrassment all right, but not as Canada had envisioned. Canada fought back for a crucial win in Toronto to tie the series, but it was clear from then on that this would be no mismatch. Game three was a tie in Winnipeg, and the final game in Canada was a horrible loss during which Vancouver fans booed the home side. Coming off the ice after the game, Phil Esposito gave his famous speech to the people of the country in an interview with Johnny Esaw. Game five in Moscow was also a disaster, another loss that had the Soviets in the lead with three wins, a loss, and a tie. Canada had to win the remaining three games to eke out victory. Then, Paul Henderson took over and the team rallied. Henderson scored the winner in game five in the second period, and in game six he scored the best goal of the series, splitting the Soviet defenceman and beating the great Vladislav Tretiak in goal as he himself was falling to the ice. That set up the final game, the night of September 28, 1972. The Soviets built an early lead but Canada rallied to tie the game. Still, a tie would have suited the Soviets because they were poised to claim victory on a superior goals differential in a tied series. With less than a minute to go, for no logical reason, Henderson screamed at Pete Mahovlich to come off the ice. It was a rare order at best, but he did so and Henderson jumped on and skated right to Tretiak's crease. The puck landed on his stick after Esposito and Yvan Cournoyer had done some forechecking, and on the second shot Henderson beat Tretiak to give Canada a 6-5 win at 19:26, 34 seconds from hockey death. The goal gave Canada victory, 4-3-1 in the eight games, and changed hockey forever. Canada learned to control the puck and skate and pass better; the Soviets learned about intensity, heart, and physical play. The world saw international hockey as it never had before, and out of this series came the Canada Cup and the start of professional hockey played between nations. Indeed, all of international hockey can be judged by this series. There is hockey before 1972, and hockey ever after.