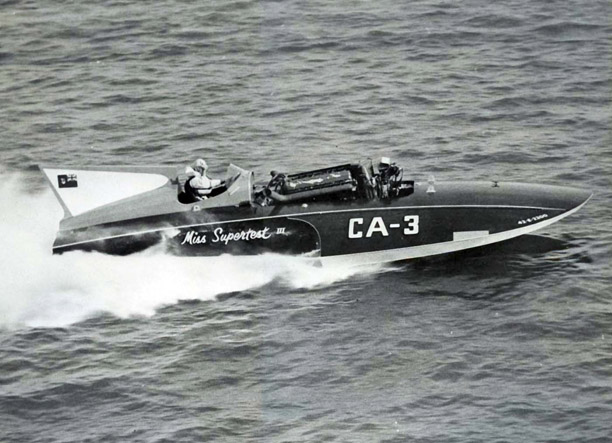 In sport that both celebrates speed and tempts fate - speed boat racing - petroleum executive James Thompson and the soft-spoken and amiable Bob Hayward defied stereotypes. Best known for winning races with the hydroplane Miss Supertest III, the team became the first Canadians to win the international Harmsworth Trophy. Thomspon's father, John Gordon Thompson, built a single gas station into Supertest Petroleum, a multi-million dollar corporation. James (Jim) Thompson was a vice president at Supertest Petroleum, but with his father's backing he dedicated much of his energy to speedboat racing and designed the world's fastest propeller-driven hydroplane. The Thompsons entered the speedboat business in 1950 by purchasing two Miss Canada boats from fellow Canada's Sports Hall of Fame inductee Harold Wilson. The younger Thompson set about teaching himself the fundamentals of speedboat design so that he could better understand the design challenges he faced. He renamed Wilson's Miss Canada IV as Miss Supertest I. In 1953-54, his team, which included designer Les Staudacher, built Miss Supertest II: 31 feet long, 12 feet wide, and equipped with a 2,000-horsepower Rolls-Royce Griffon motor. The boat, while fast, struggled under race conditions, losing both the 1954 Silver Cup and the 1956 Harmsworth Trophy challenge. Nevertheless, on November 1, 1957, with driver Art Asbury at the throttle, Miss Supertest II set a world straightaway speed record of 184.499 miles per hour off Picton, Ontario, breaking a seven-year-old record. Thompson's goal, however, was the Harmsworth Trophy, and in 1958 Miss Supertest II was retired so that the team could concentrate on a new boat for the 1959 competition. Miss Supertest III, which also featured a 2,000-horsepower Rolls-Royce Griffon motor, was christened in 1959 and designed specifically to challenge for the Harmsworth Trophy, an international competition between nations. The trophy was donated in 1903 by Sir Alfred Harmsworth to encourage the development of motorized water craft. By 1959 the U.S. had held the trophy for 39 years. Thompson challenged for the 1959 championship with both a new boat and a new driver. Raised on a chicken farm in southwestern Ontario, Bob Hayward was interested in stock cars and drag racing, and this led him to speed boating. He joined Thompson in 1957 as a mechanic and crew member for Miss Supertest II. A year later, he was promoted to full-time driver, winning the St. Clair International Regatta at St. Clair, Michigan. The first race for Miss Supertest III, and the only non-Harmsworth race in which the boat ever competed, was the 1959 Detroit Memorial, a Harmsworth qualifying event. Later that year, Hayward piloted Miss Supertest III to a successful Harmsworth Trophy challenge at the Detroit River, with an average speed of 104 miles per hour. The Miss Supertest III team successfully defended the Harmsworth Trophy in 1960 and 1961 at Picton, Ontario, becoming the first boat to win the trophy three successive years. In the 1960 competition, Hayward and Miss Supertest III set a world lap speed record of 126.226 miles per hour on the five-mile course. Miss Supertest III was undefeated in the four races in which the boat was entered. With Hayward driving, the boat started ten heats over those four races, winning eight and finishing second twice. Shortly after his third Harmwsorth triumph, however, Hayward's dalliance with speed tragically cut short his life. On September 10, 1961, driving the older Miss Supertest II in the second heat of the Silver Cup on the Detroit River, Hayward was going an estimated 155 miles per hour when the boat flipped, killing the driver. The Thompson team immediately retired from racing and permanently dry-docked Miss Supertest III. As tribute, a bay in Lake Ontario near Picton has been named Hayward Long Reach.