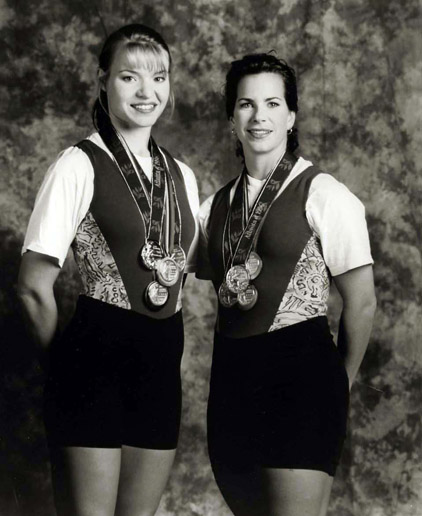 Canadians are still feeling the ripple effect in the enormous wake of Marnie McBean and Kathleen Heddle's success. These two scullers dominated the world rowing scene in the 1990's, becoming the first Canadians to win three Summer Olympic gold medals. At the 1992 Olympics in Barcelona, McBean and Heddle claimed gold in both the eights and the pairs. Proving to be a truly unstoppable team, they rowed their way to gold once again in the double scull event at the 1996 Olympics in Atlanta. To top off their medal collections, McBean and Heddle claimed bronze in the quadruple scull event, making them the nation's most successful Olympians. In addition to her Olympic triumphs, McBean also held three World Cup, eight U.S., and three Canadian titles. An extremely versatile oarswoman, McBean was the first woman to claim a medal in every boat class at World and Olympic events. She hoped to win a fourth gold medal at the 2000 Olympics but was forced to withdraw because of a back injury. McBean, however, put sportsmanship, national pride, and the love for her sport above her disappointment, and lent enormous support to the Canadian team during the games.