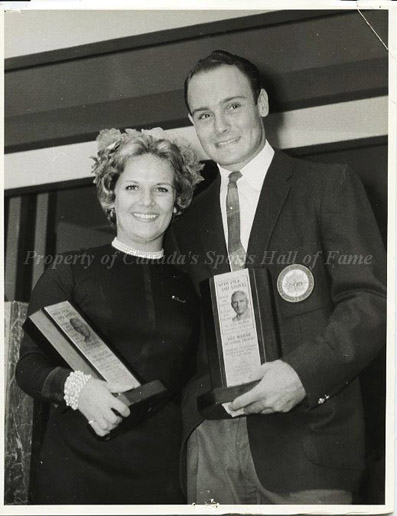 Before they became a team, figure skaters Bob Paul and Barbara Wagner both had their sights set on careers in singles competition. Their coach, the legendary Sheldon Galbraith, thought that they had a significant amount of personal development to undergo before succeeding in the competitive world. Wagner was the extrovert, while Paul was shy. Galbraith paired the skaters in 1952 in the hopes that they could learn from each other before focusing on their individual performances. The two worked so well together, however, that they soon converted to pairs competition, forging one of the most successful partnerships in Canadian skating history. By 1954, they were Canadian junior pairs champions, and by 1956, they were national champions. Paul and Wagner continued to skate their way to the top in 1957, earning the triple crown of Canadian, North American, and world championship titles. They retained their supremacy by successfully defending all three titles in 1958, 1959, and 1960. In 1959, Wagner and Paul were joint recipients of the Lou Marsh Trophy as Canada's athletes of the year. Amazingly, though, their greatest accomplishments were yet to come. After four victorious years together, only one title lay unclaimed--Olympic champions. Wagner and Paul arrived at the 1960 Games in Squaw Valley determined to add Olympic gold to their already vast award collection. The podium seemed within their reach until one minute into their program when the record playing their music skipped, throwing the couple slightly off their mark. Luckily, they were permitted to restart the entire routine. This time, the record ran smoothly, and the skaters gave the performance of their lives. Their display was so dazzling, so flawless, in fact, that the pair received first place votes from every single judge on the panel. Paul and Wagner were the first North American pairs to win Olympic gold, and remained the only one to do so until 2002. With no podium left to conquer, Wagner and Paul retired from competition following their tremendous Olympic victory. They skated professionally with the Ice Capades from 1961 to 1964. For their brilliant achievements, Paul and Wagner were inducted into the World Figure Skating Hall of Fame in 1980 and the Canadian Figure Skating Hall of Fame in 1994.