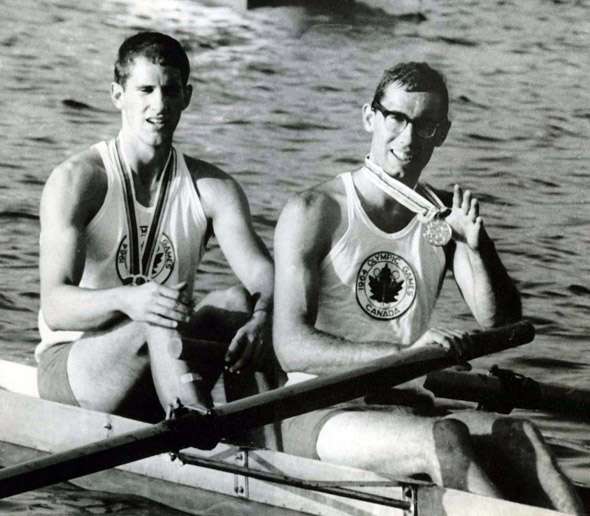 Gold medal-winning teams are often built through years of training and months of collective conditioning such that the physical and emotional bond between teammates is so strong that they operate as a single organism. But sometimes simple chemistry and a little luck can make up for lost time. Such was the case with rowers George Hungerford and Roger Jackson. Although these two castoffs from the Canadian rowing team came together just a few weeks before the 1964 Tokyo Olympics, they still managed to claim the gold medal in the coxless pairs event. While students at the University of British Columbia, these two athletes each earned a place on the school's Olympic rowing crews, Hungerford in the eights and Jackson in the pairs. Unfortunately, after months of intensive training, Hungerford came down with mononucleosis and was forced to withdraw from his crew. Jackson's pairs partner, Wayne Pretty, was called on to replace him. As a result, both rowers found themselves out of the race, Hungerford because of illness, and Jackson because he was partnerless, but both were still headed to the games as alternates. To keep in shape, they started training together. Hungerford was still extremely weak, and often had to go back to bed after their morning workout, but by the time the Tokyo preliminaries rolled around, Jackson noticed that he was beginning to row with more strength and authority. Much to everyone's surprise, the castoffs won their first heat and advanced to the finals. Despite this promising start, no one thought Jackson and Hungerford had a chance at a medal. The Germans and the Dutch were the golden favourites, and most Canadian Olympic officials skipped out on the race entirely to watch a much more promising track and field event. But conditions were in the rowers' favour. There was no crosswind that day, so they didn't have to worry about the fact that they were the only pair with a boat lacked a rudder. In a carefully planned race designed to keep them in contention and at the same time preserve Hungerford's energy for the final pull, these two Canadian underdogs overpowered both the Germans and the Dutch, crossing the finish line three-quarters of a boat length ahead. The "Golden Rejects," as they were soon dubbed, came away with Canada's first Summer Olympic gold medals since 1956. They returned home to a hero's welcome and received the Lou Marsh Trophy as Canada's top athletes that year. Jackson participated in two more Olympic Games before devoting his life to sports academia and administration. He earned a Ph.D. in Biodynamics in 1970 and served as Dean of the Physical Education at the University of Calgary from 1978-88. He remained involved with the Olympic movement, serving as director of Sport Canada from 1976-78, and president of the Canadian Olympic Association from 1982-90. For his significant contribution to Canadian sport, Jackson was named an Officer of the Order of Canada in 1983.