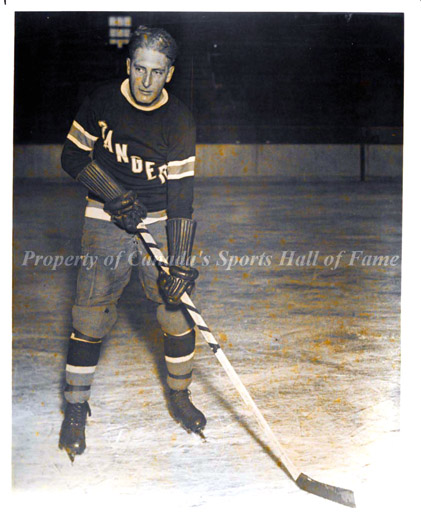 Although he played just a single NHL game in his career, Lester Patrick was nonetheless one of the most important men in the early days of professional hockey. He started as a player in Montreal, in the junior system of the AAA, and in 1906 became the captain of the Wanderers, leading the team to consecutive Stanley Cups in '06 and '07. Patrick then moved out west to play, and in 1909 he and brother Frank went to Renfrew as a tandem. Two years later, they moved back to British Columbia with more businesslike interests. They convinced their father to help finance the building of two arenas with artificial ice, one in Victoria, the other in Vancouver. They then lured as many players from the east to a league they were starting, a league that was in many ways superior to the NHA and later NHL. The Patricks were the first to introduce a playoff format to a league. They put numbers on their players' backs and brought new rules to the game that encouraged offense and excitement. They also offered salaries better than what was offered in the east. It was, in many ways, the WHA version of the 1910s, and paved the way for modern hockey. Lester remained playing out west until 1922 when he retired as a player and turned to coaching the Victoria Cougars for three seasons. He got into his only NHL game in emergency circumstances. It was the 1928 playoffs and he was general manager of the New York Rangers. Goalie Lorne Chabot was injured in the second period of a game against the Montreal Maroons, so the 45-year-old Patrick donned the pads and played the rest of the game, a 2-1 overtime win for the Rangers. The Rangers went on to win the Cup. It wasn't until 1946 that Patrick returned to Victoria after two decades on Broadway, the Rangers' most formative and successful years. In honour of his career there, the Lester Patrick Award was introduced in 1966 to be given to those who have made a significant contribution to hockey in the United States. Patrick was inducted into the Hockey Hall of Fame in 1946, a true pioneer of the game.