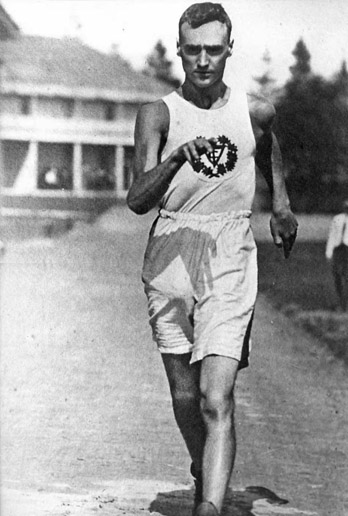 Though he started off as a marathon runner, George Goulding soon found that he could go much further simply by walking. Goulding was first introduced to the sport of race walking while training for the 1908 Olympic marathon. Though it stems from an everyday activity, race walking is an extremely demanding sport that requires much skill and concentration. Walkers must achieve maximum speed while keeping one foot in contact with the ground at all times. Competitors are watched closely, and poor form results in disqualification. Goulding took to the sport so quickly that he was able to enter the 3,500m walking event at the 1908 Olympic Games in London, England. Goulding placed fourth, an astounding result for his first race. This fantastic feat, however, was only the beginning, for Goulding never again would be defeated in a non-handicapped walking race. In 1909, Goulding entered 19 major walking competitions, winning 18. At his 1910 debut on the American walking scene, he broke the U.S. record for the mile walk with a time of 6:29.2. By this time, Goulding's rising success had caused quite a stir among Canadian sports fans. A match race was soon set up between Goulding and Olympic walking champion E.J. Webb of England. Goulding easily won both the one and three-mile races as 20,000 fans cheered him on. A second match race against English champion George Larner once again proved to be no contest. In 1911, the unbeatable Goulding proceeded to break the world record for the mile with a time of 6:25.8. Goulding was so good that he was often handicapped in competition and forced to wait at the starting line while his opponents walked ahead. But even with head-starts of a few hundred yards, opponents still couldn't beat Canada's heal-and-toe champion. It was, therefore, no surprise that Goulding claimed gold in the 10,000m race at the 1912 Olympics. His record time of 46:28.4 stood until 1948. Goulding also competed in a number of stunt races over the course of his career, which included walking against a four-man relay team, as well as a man driving a horse and buggy. In 1915, Goulding's shining star was slightly tarnished when American officials accused him of accepting payment for his athletic feats and succumbing to "professionalism." Goulding, a man known for his honest, gentlemanly conduct, held firmly to his amateur status, and proved that he had never accepted payment aside from travel expenses.